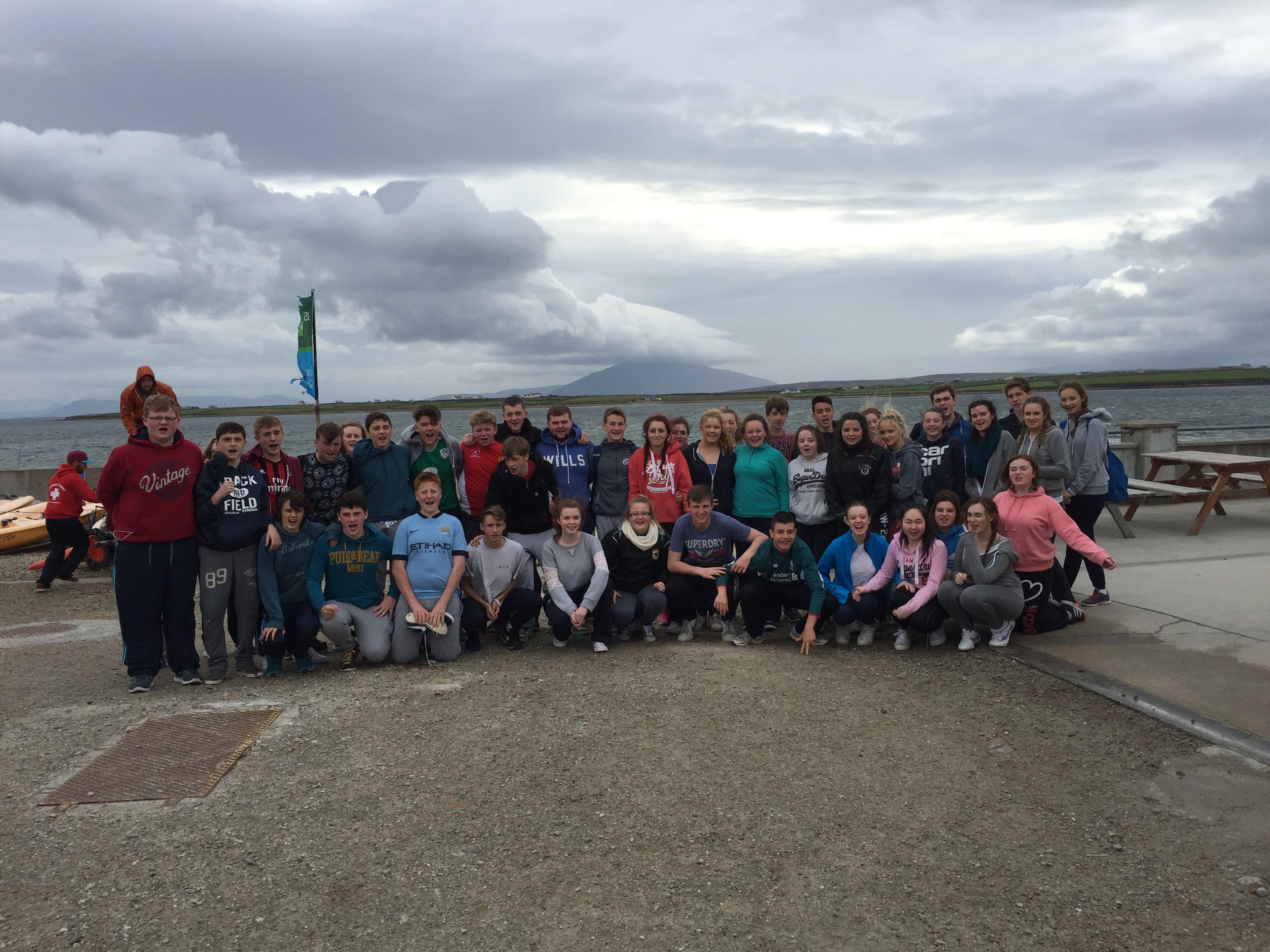 It was an early start ar an gCéadaoin an seachtú lá do Dheireadh Fomhair. The take off was delayed a little… but we had a great turas ar an mbus! We reached 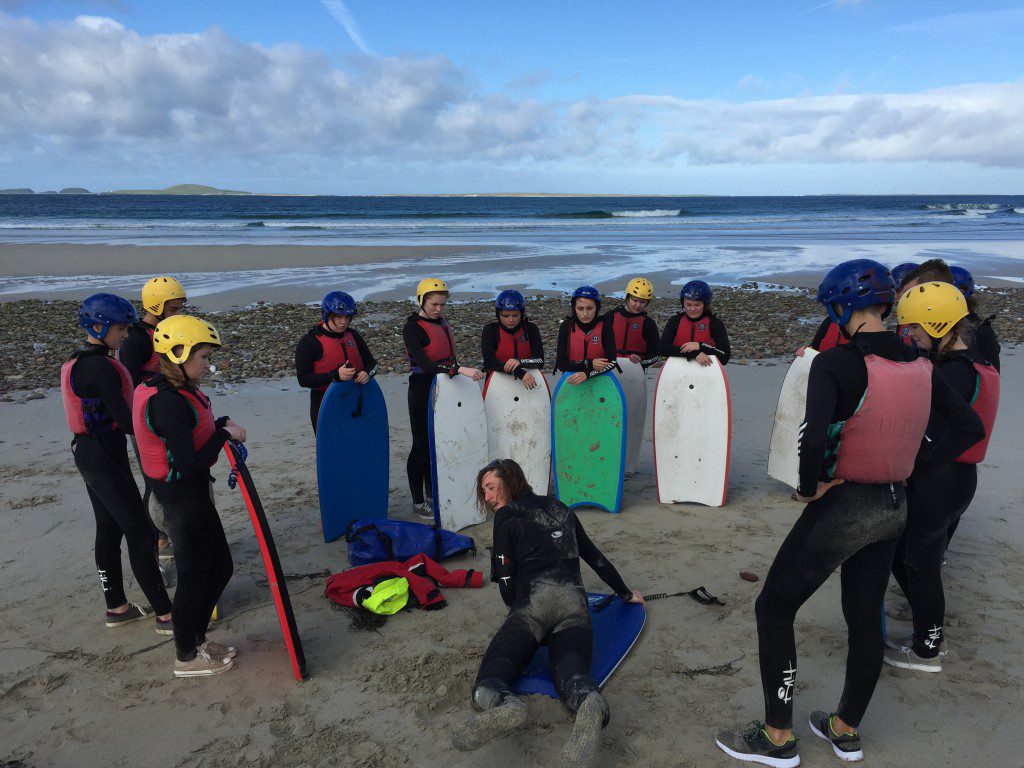 Uisce at 12.30 and met with the leaders. There was no delay in getting into the UISCE! All students took part in every activity including archery, body boarding, pier jumping, kayaking, raft building and cart building! Bhain gach duine taitneamh as na himeachtaí go léir! Ar an Déardaoin bhí oíche iontach againn ag an gcéilí… Uachtar Reoite the best song by far! A few new moves were learnt that night. (Éire abú) D’fhoghlaim gach duine cúpla focal nua…. go háirithe na buachaillí ón Spáinn! Everyone was faoi bhrón agus tuirseach traochta ag dul abhaile… Bhain gach duine taitneamh as an turas ar fad! A special mention has to be made to the hero AUSTIN (AN CEANNAIRE) an gaelgeoir agus an damhseoir is fear!!

On the Wednesday we met up at the main entrance at the school at 6:50. We left just after 7. The bus drive was about 5 hours, but we stopped half way to get food. When we got there we were introduced to the people who work there and were told about the rules. We were then showed where our rooms which were upstairs, most rooms had 2 bunk beds and 1 single bed, a shower and bathroom, we then got ready for our first activity. We met up back downstairs and were split into two groups. My group were first to do the water activity which was kayaking. We got into our wetsuits and got helmets and life jackets. We had a choice to go in a double or single kayak and had to carry them down to the bay. We were first showed how the life jackets worked which was very helpful for those who weren’t confident in the water. We were then taught how to turn around in the water and how to go in each direction. Once we were used to that we had a race. Afterwards we were allowed jump into the water or swim around. When we were finished both groups switched so it was my groups turn to do orienteering. We went in twos and one of each person’s legs were tied together and one person was also blindfolded. We were then given a map on where to go and a red card which had numbers and spaces underneath them. When we got to the number on the map eg.1 there was a puncher which you punched the red card with and made different designs for each number. After that we got dinner and had 2 hours for free time, where we could play basketball, table tennis, football and rugby. Then we had our first night activity which was archery where we were then split into smaller groups of 5. After that we had to throw an egg off the roof without it breaking and you were given a plastic bag, 2 balloons, tape and an egg. Only one team’s egg didn’t break. We then had supper and at 11 we had to go to bed.

On the Thursday we got up at half 8 and got breakfast and then went and got ready for the morning activities. We first of all played games, the first one was paddy and polo which is where two people are blind folded and given each name and paddy shouted paddy and polo shouted polo and paddy had to find polo by following their voice whereas polo had to try get away from paddy. We then got in groups of two and were told of different positions to do when a certain word was said and the last group to do it was out and it stayed going till there was a winner. We then went on to do body boarding. When we got to the beach we did a warm up by running around the beach. Then got into the water and when a wave came you turned away from it and most of the time you could get on top of it and brought with it. After we went and got lunch and went onto the next activity which was kart building, we were split into the groups of 5 again and were given instructions on how to build it. Once everyone’s carts were built we went outside and there was a course set up and each team raced around it and were timed, two people sat in the karts while the rest pushed you. The second time the drivers were blindfolded and the people who were pushing had to tell them when to turn. We then went peer diving. The first jump was small and only a few steps up, the next one people were doing cannon balls etc, the last one was extremely high and people did the same. The majority of people did the dives but the people who didn’t want to could just swim around the harbour or go on the surf board. After we went and got dinner and had free time again. We then did our night activity which was a ceilí. We were thought different dances and afterwards we had a disco. We then went to bed at 11pm.

On Friday we got up and got breakfast as usual. We packed up our stuff and brought our bags down to the ping pong room. Our first activity was raft building, you basically got rope, wood and bottles and had to make a raft. Once everyone built their raft we brought them to the water and there was one of the leaders out in the sea on a surf board we had to race out to him and back again and then dismantle our rafts, first ones finished won. After that we did rock climbing which was a lot harder than expected. After we got lunch, each activity was graded and the winning team got green wristbands and everyone else got red ones and also got an envelope with the courses that they do and a 20% off any course if we wanted to go back during the summer. We then went to the bus, we stopped off at the same place on the way up to get food and then we got back to the school at 6.

I think Uisce was a really good experience for everyone and it brought people closer and some people who wouldn’t normally talk now do which is really good. The leaders there were all so friendly and easy going. I think everyone really enjoyed it. It was a really good bonding trip for all the TYs. 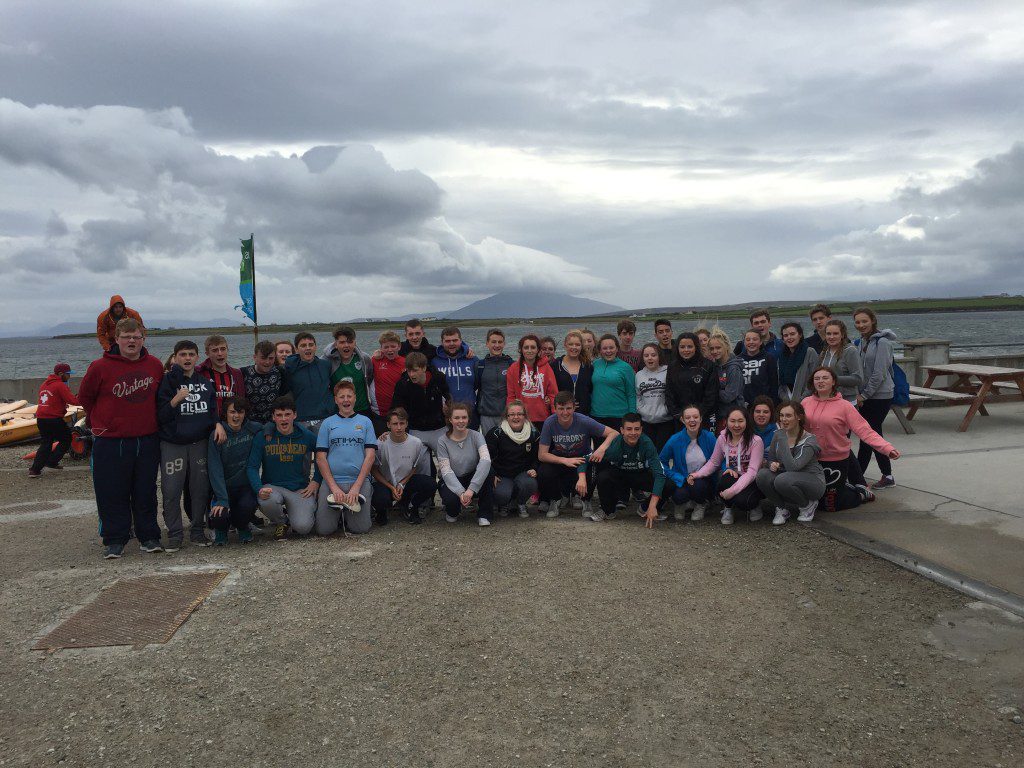