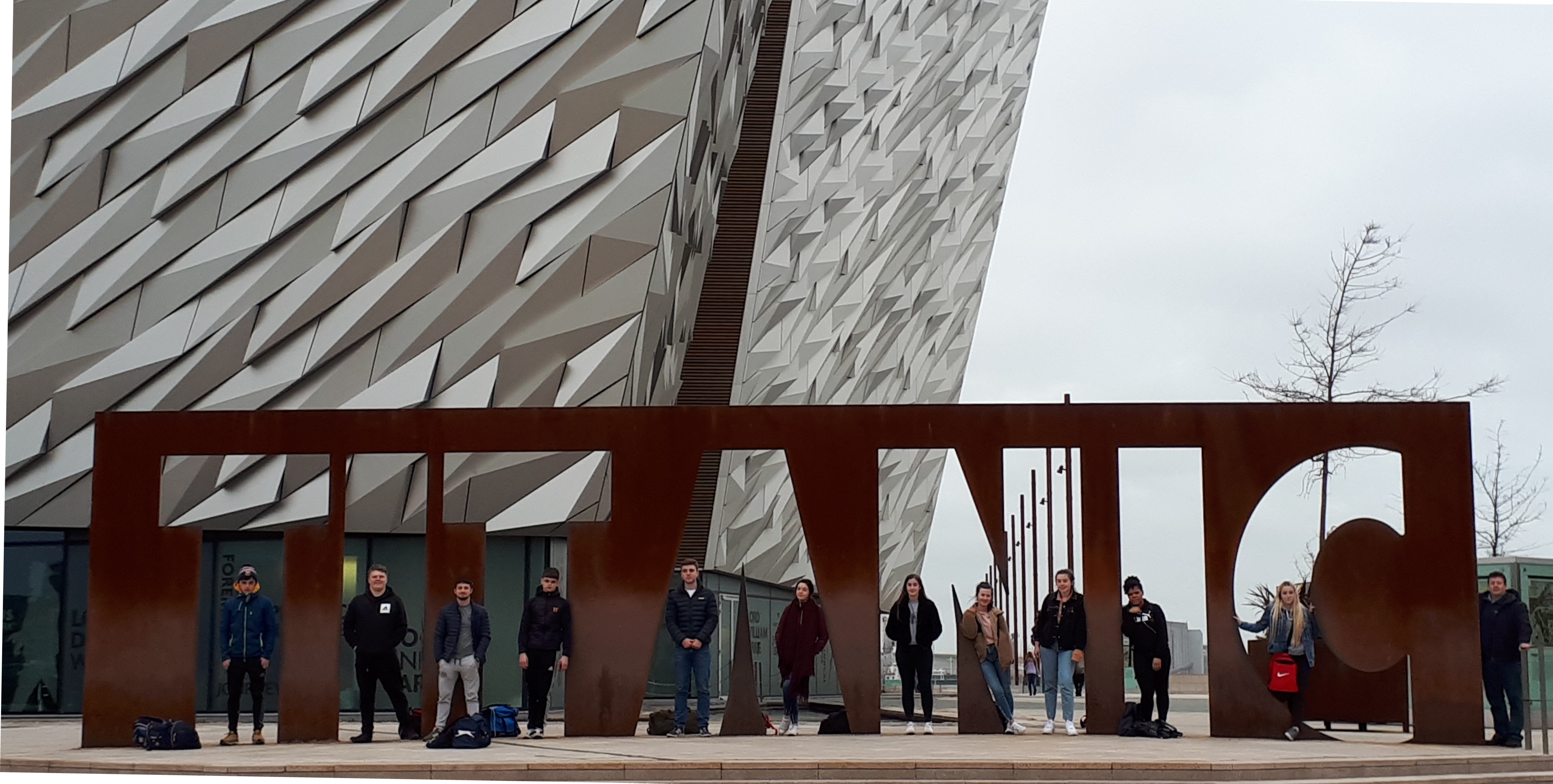 As the motley crew of 13 history students left Monasterevin at stupid 0’clock in the morning to make their way to Connolly station for a 7.30am train journey north, they weren’t to know what was ahead of them, esp 41,000 steps over the two days! 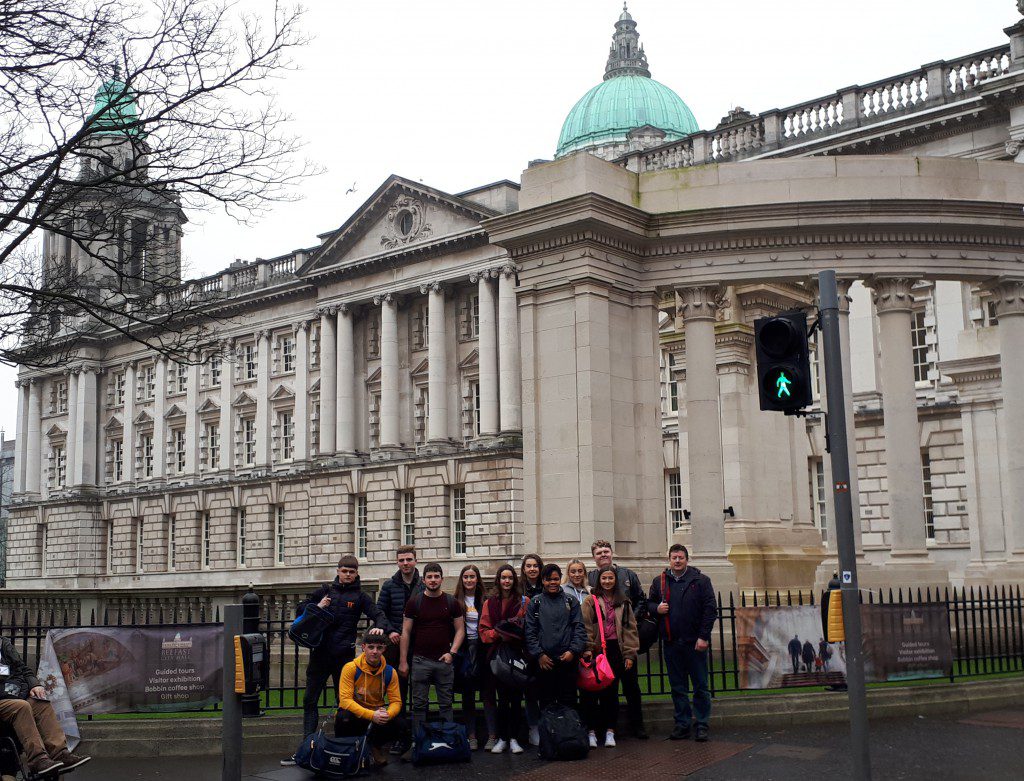 City Hall: This was our first stop after our arrival in this bright and cheerful city and the weather held. We were brought on a guided tour of the inner chambers where the Deputy and Lord Mayor of the city sat and carried out their civic business. The site now occupied by  City Hall was once the home of the White Linen Hall, an important international Linen Exchange (linen is used as a logo for the city)

Ulster Museum: without doubt the two main attractions at the museum at the moment were the original Da Vince drawings (some of which our students would have seen in their JC history books) and the Game of Thrones tapestry (which is based on the Bayeux Tapestry). Other attractions included dinosaurs, many original artifacts from Irish history and the Troubles. 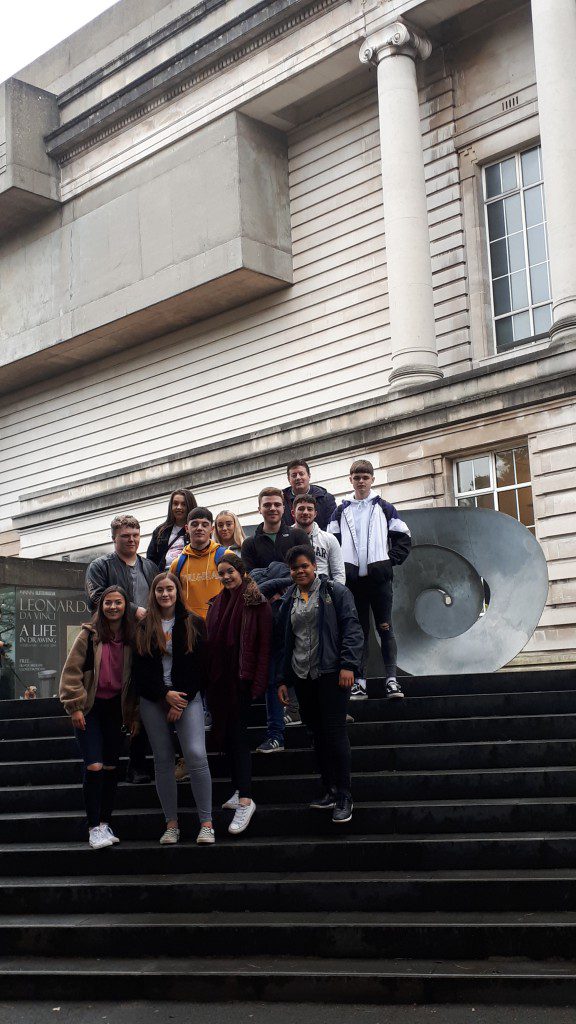 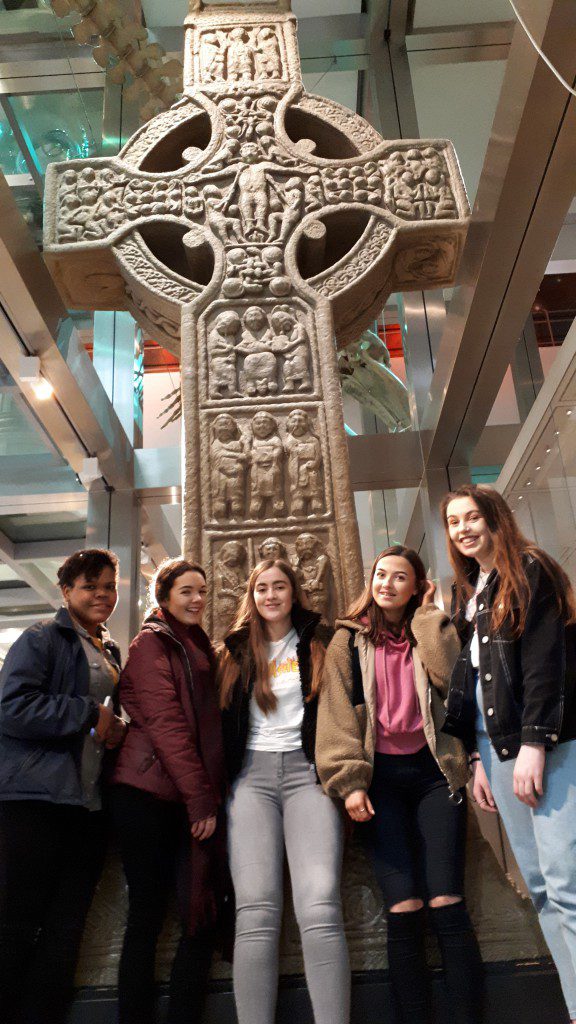 Murals/Peace Wall: the political murals offered an insight into the troubled past of Belfast,  with the students gaining insight into the conflict and seeing how it has shaped the local communities, depending on which side we were on, with Union Jacks and Tricolors aplenty…it was a time for quiet reflection on the Falls and Shankill roads. 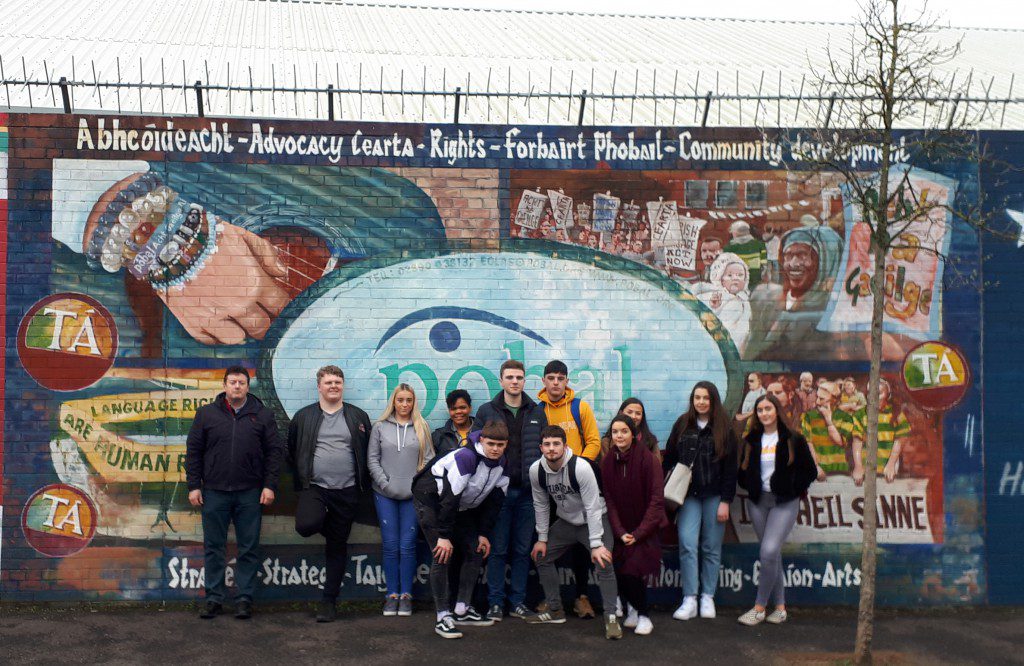 Bowling: after a long day’s walking, the students needed some downtime, so off to the Odyssey arena for much needed steam blowing off. The girls and the boys all bowled (mostly with the kiddies’ rails up) and enjoyed it immensely, although beaten by Mr Ferry (who hadn’t the kiddie’s rails up) was probably not… fun for them.

George’s Market: Day 2 saw us getting in a quick visit to the last surviving Victorian covered market in Belfast, which had been used as a mortuary during the Belfast Blitz. One could buy anything there, and some did!

Stormont: Next we were off to Parliament Buildings to see the building where the Northern Ireland Assembly meets, or rather hasn’t in the last 2 years! Another guided tour where we were regaled with stories of Belfast’s troubled past and got to sit in the cushy seats that the elected representatives of the province sit,,,when they’re there that is. Who knew that during the Belfast Blitz of WW2, the building was painted black to conceal it from the Luftwaffe? But this being Ireland, it was painted black using a mix of tar and cow manure…it took 7 years to clean… 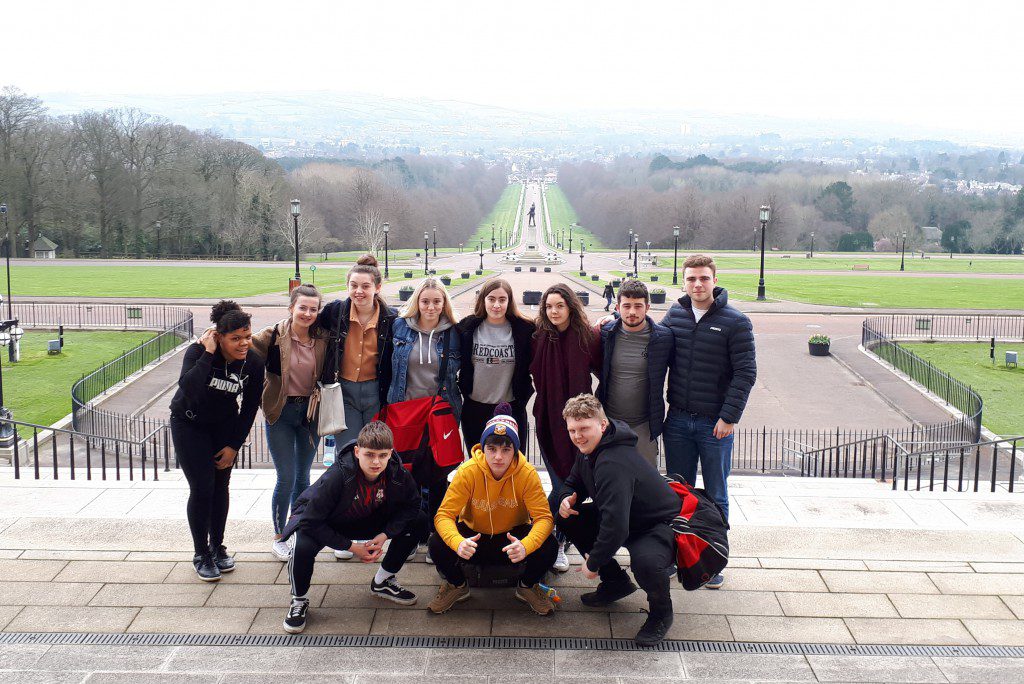 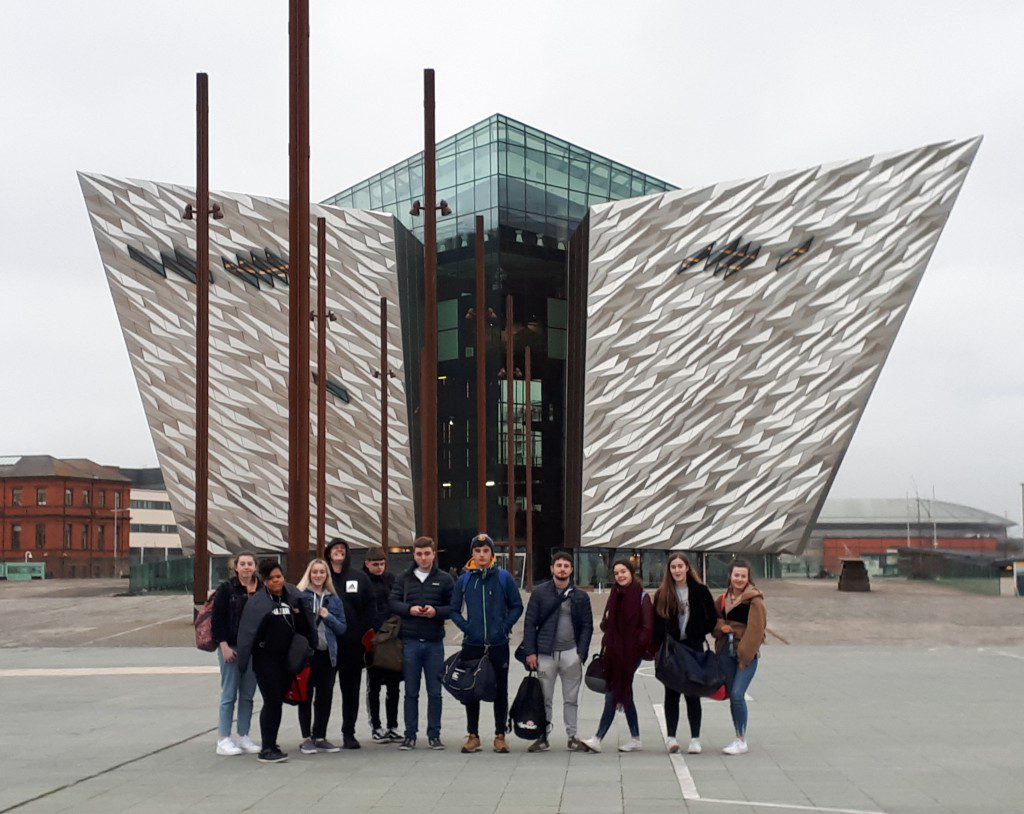 Titanic Quarter: Our final stop was to see the iconic building and slipway where the famous Titanic had been built. Nearby were Samson and Goliath, the massive yellow cranes that had built it over a 100 years ago.

So, 41,000 steps or 31 km later, following Mr Ferry and the google maps in his head, we headed to the train station, unfortunately through the pouring rain, our only negative experience…but this is Ireland…

Many thanks to our official photographer, Maria Hanlon, who took all the fantastic photos in this blog.

And many thanks to Mr. Marron for busing us to Connolly station and back safely to home base. 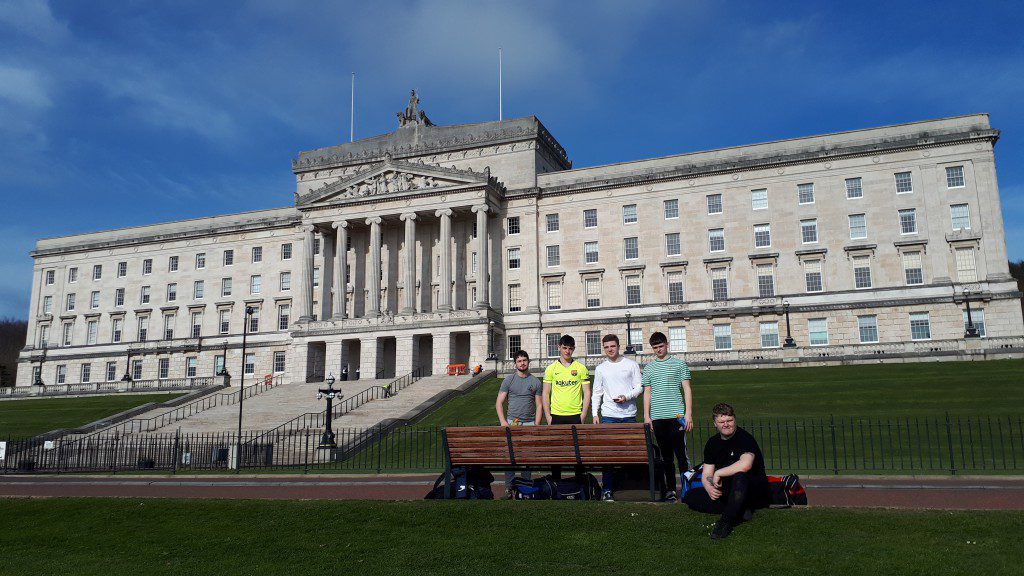 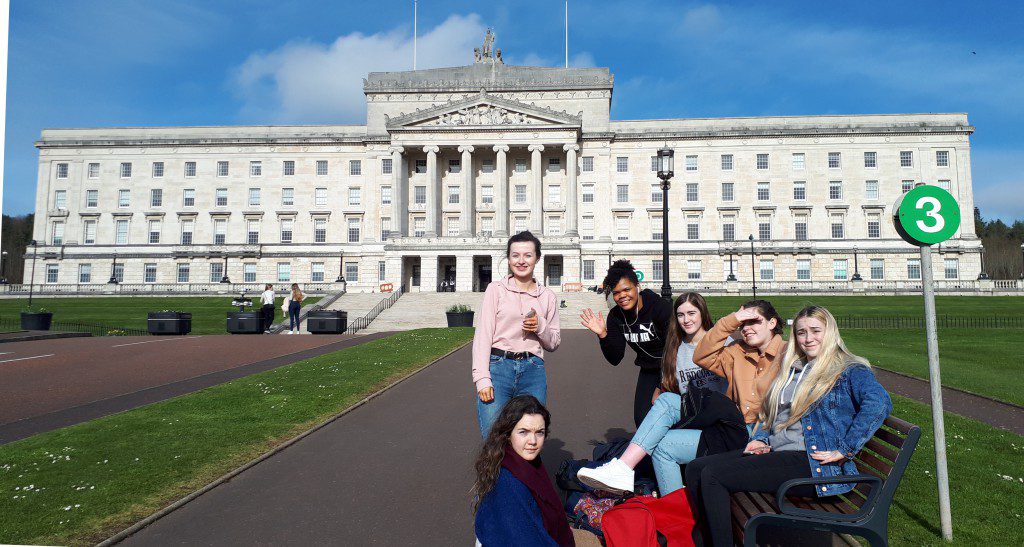 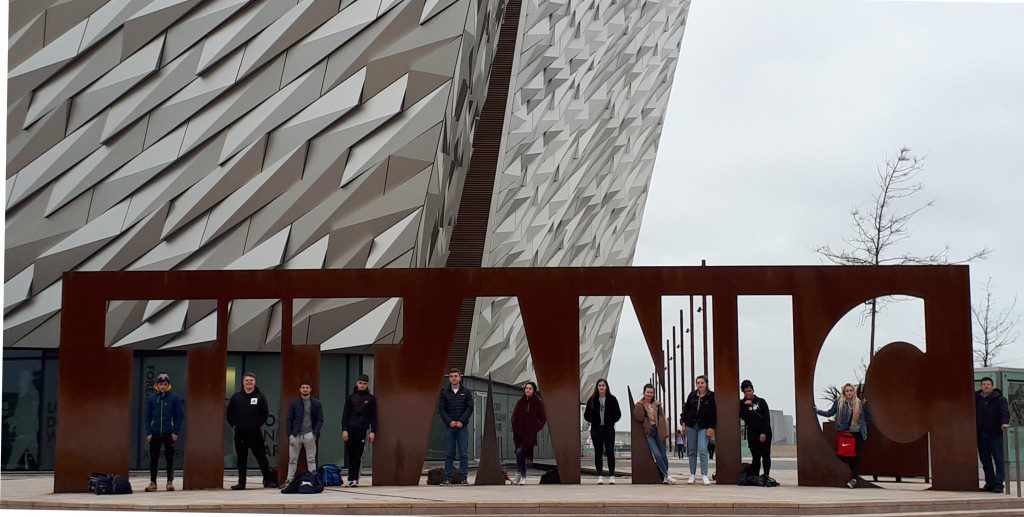