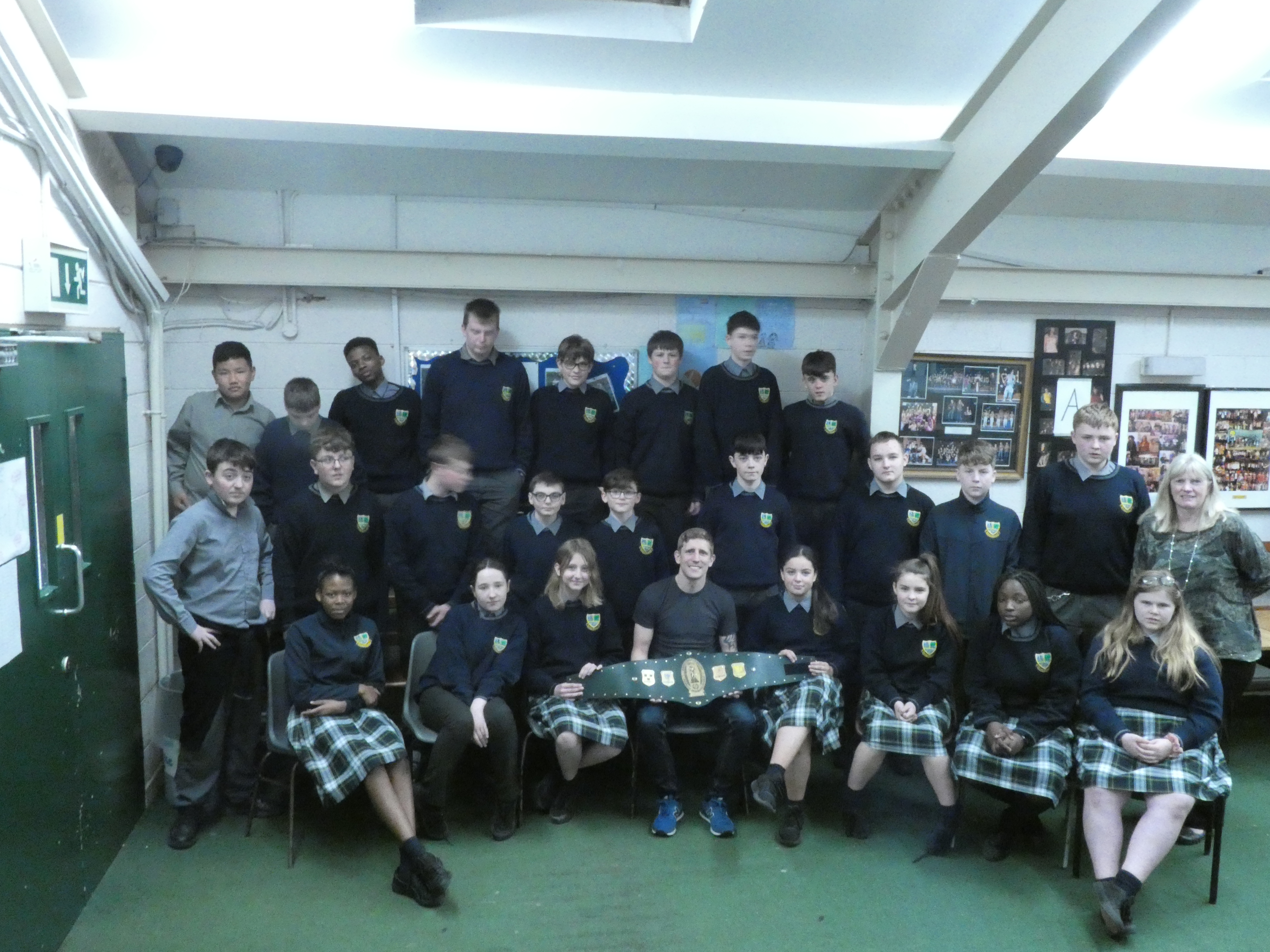 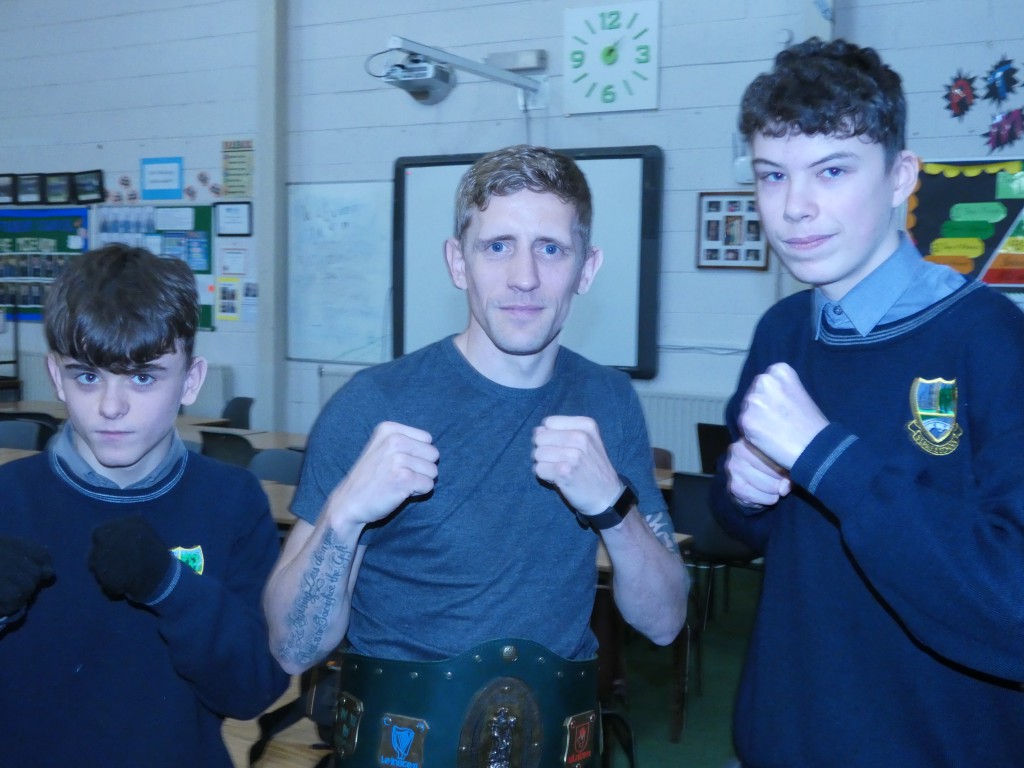 Eric Donovan, the Irish international boxer from Athy, came to our school recently to do an inspirational talk to our JCSP group in 1st year.

He was talking about his career and how you can achieve anything once you put your mind to it. He also said that he travelled all around the world during his boxing career.

Russia was one of the places that he went to and spent some amount of time there. With the help of his manager he learned to speak Russian fluently.

He said some words to us that seemed like ‘jibberish’ to me but it wasn’t…..it was Russian. The Russian language is pretty cool. When he was fighting, he won the Celtic League and he let all of us hold the belt that he won…..it was class.

He showed us one of his fights on YouTube. It was when he knocked someone out! It was a good time for Eric. At the end we got a group photo and some individual ones along with his autograph.

We had a blast.

The JCSP’s of St Paul’s were a captive audience for professional boxer and RTE boxing analyst Eric Donovan.

Fitting so much into a short space of time, Eric’s talk was ideal for teenagers covering so many aspects from dealing with setbacks and coming back from difficult situations to achieving personally and professionally.

Still only in his early 30s Eric has had so many experiences that the students could relate to and understand.

The story begins with tales of school and how feelings of anxiety and not fitting in led him to being a disruptive student, something he regrets to this day.

Dropping out of school at the age of 15, being a follower and not a leader at that point in his life was a really valuable message to pass on.

Education was to play an important role in latter years and Eric returned to it at the age of 28. The message of making the most of education really hit home with the students.

In the boxing ring Eric had a rollercoaster career, captain of the Irish amateur boxing team at the age of 15, multiple all Ireland medals, the first senior all Ireland champion for the St. Michael’s Athy club, becoming a member of the high performance national team, everything was on the rise for him.

However, old habits die hard and Eric’s lack of commitment out of the ring was to prove his downfall. Not training as hard as he might, not having the correct lifestyle, resulted in failure to qualify for two Olympic games and the realisation that he needed to change his ways.

‘Good decisions make good things happen’ said Eric and a new chapter begins with an opportunity from RTE to be an analyst and commentator for the 2012 London Olympics and beyond.

Boxing wasn’t over though and he took an opportunity to go to Kazakhstan to train and fight in a really tough environment, highlighting a major theme of his talk- the importance of perseverance.

This was really inspirational stuff and the journey is not over yet as his pro career is flying.

The students asked some great questions to finish up and interacted with Eric, even getting the odd boxing demonstration! 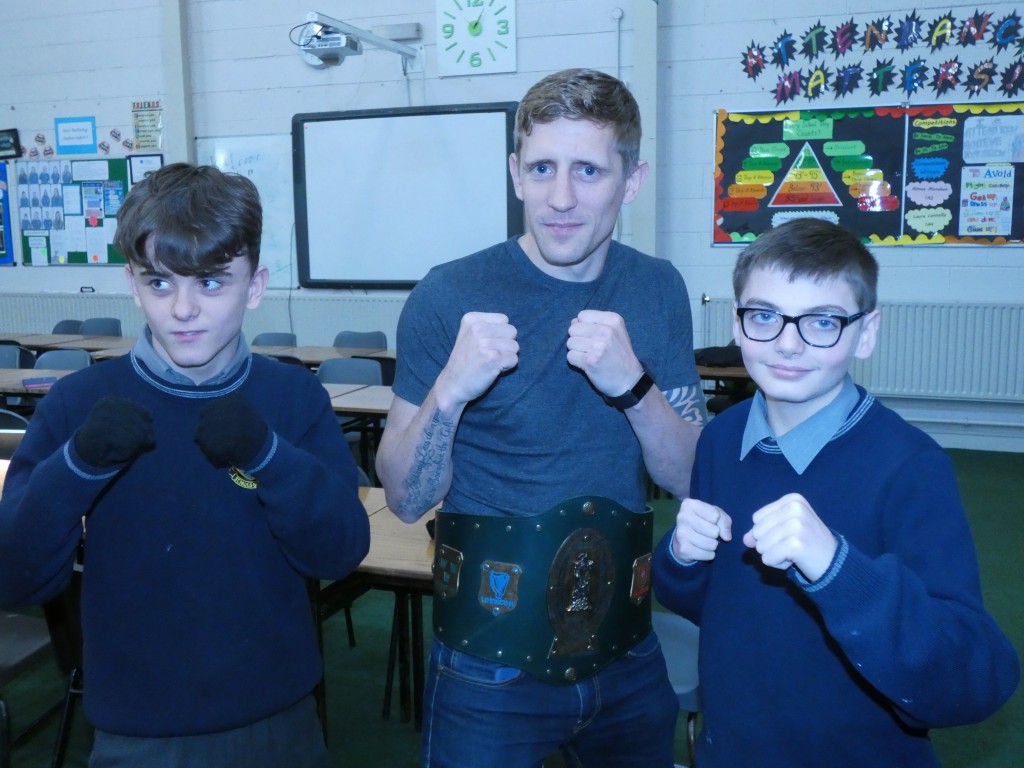 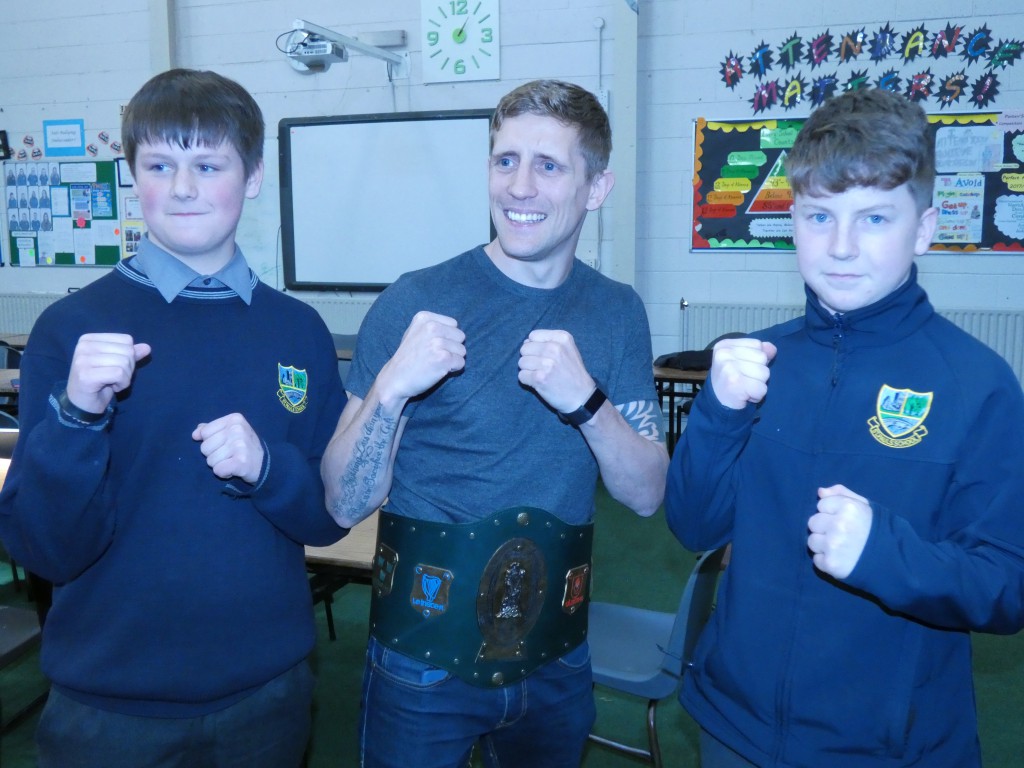 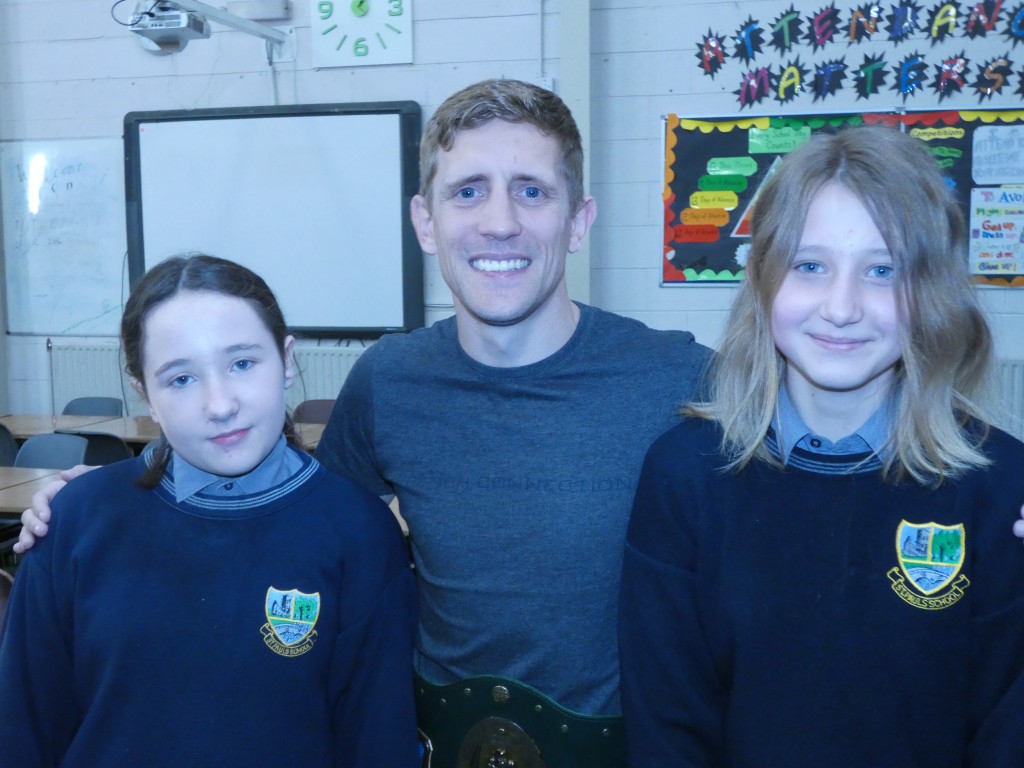 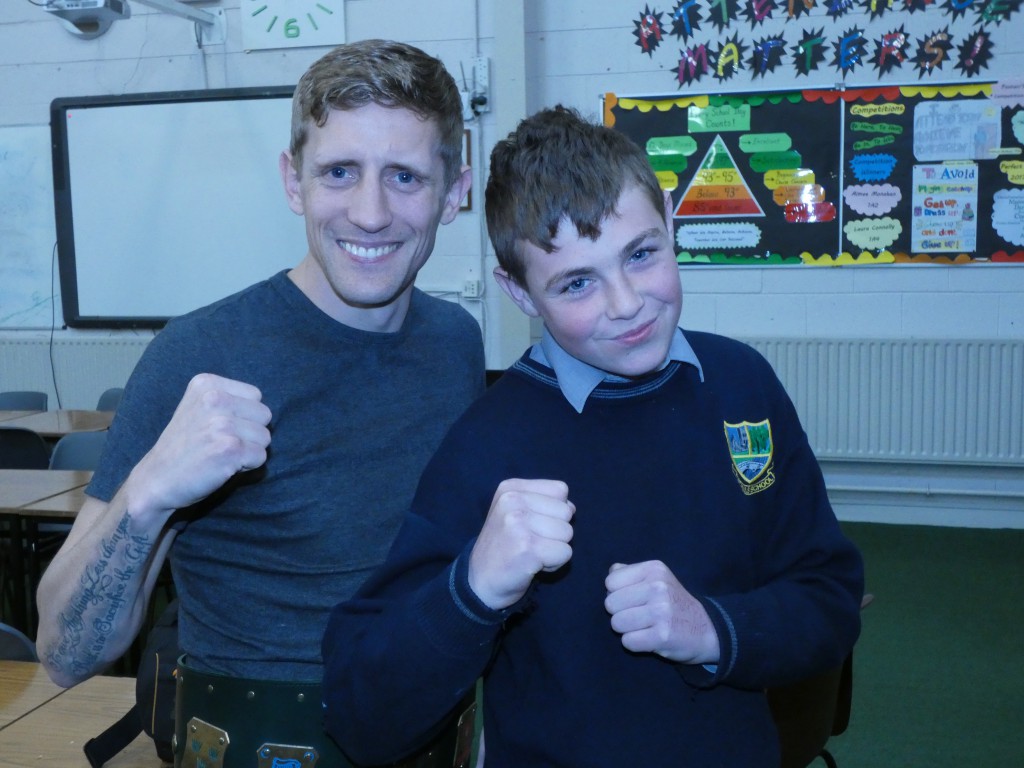 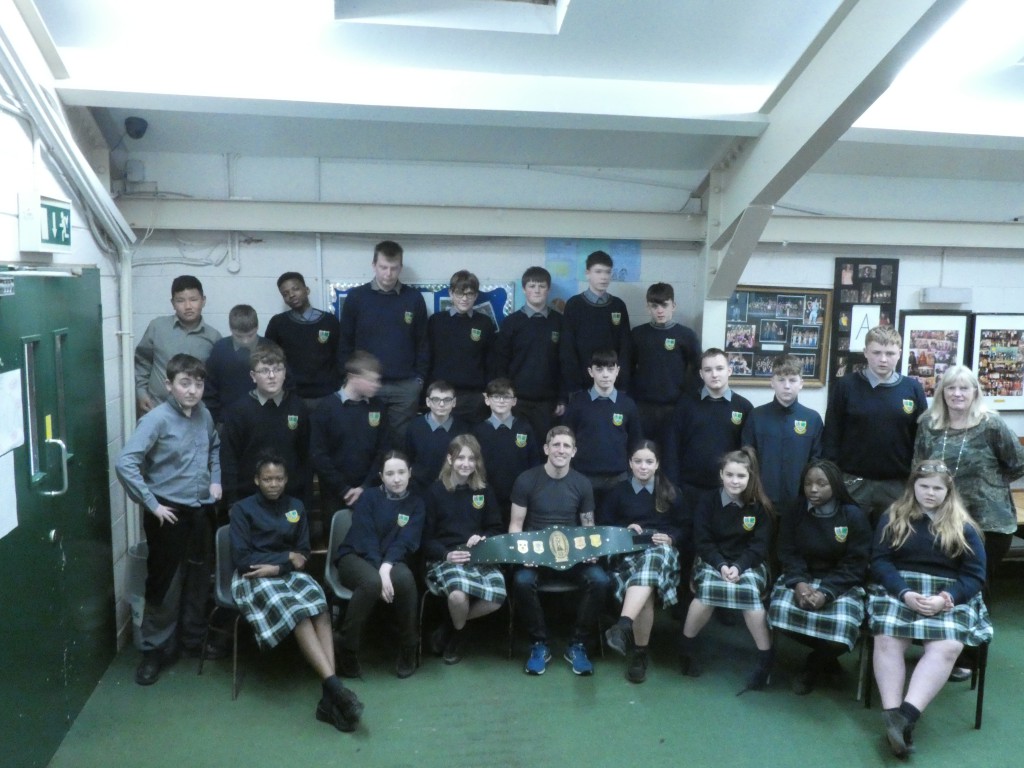