St. Paul’s Secondary School Monasterevin hosted their Annual Awards Night for the academic year 2014-15 on Friday the 13th of November 2015.

A large crowd of invited students, parents, staff and sponsors were there to acknowledge the sporting, active student and academic achievements of the students. The evening started with words of congratulations for the students, their teachers and their parents from the school patron  His Grace Bishop Denis Nulty,  Principal Brian Bergin, and the Chairperson of the Board of Management, Noel Merrick.  A photographer and parent Mel Doyle was in attendance to take photos of the student receiving their awards.

The emcee for the night was Ms Aine Doyle, Head of Science at St Paul’s and she called on last years  Meitheal leaders and the winners of the John Paul 11  Awards  for their awards which were presented by Bishop Denis Nulty. The prefects from 2014/15 were praised for their assistance during the year and received their trophies from Sister Angela and Miss Sullivan.

Next the 18 students who had perfect attendance were presented with trophies by the Deputy Principal Mary Mullally. 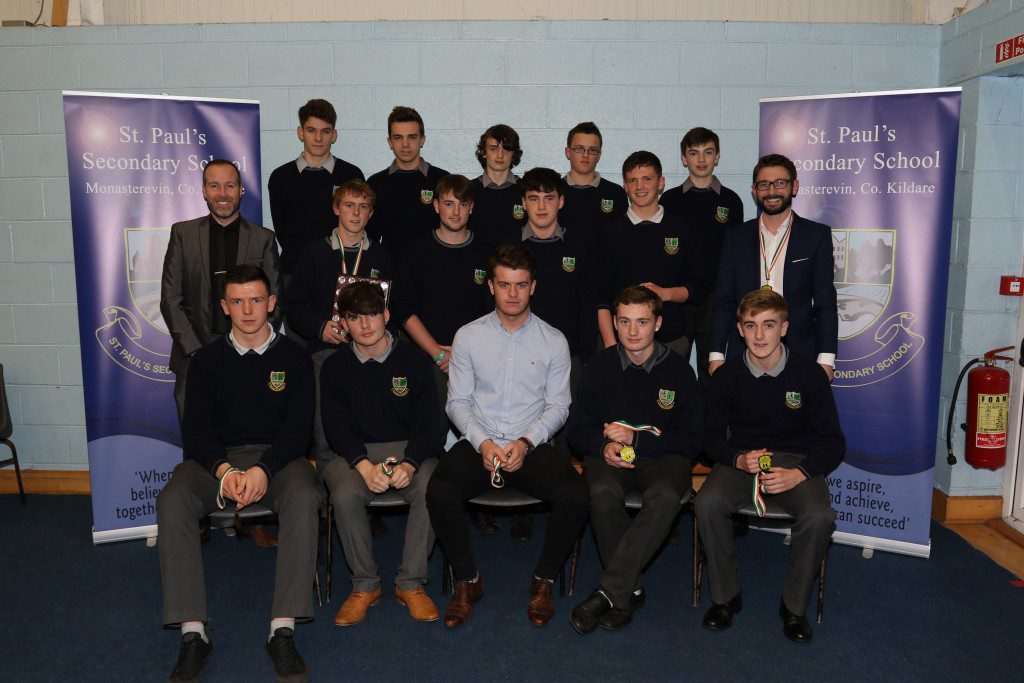 In addition all the senior and second year girls basketball teams were presented with medals as 2014/15 was a very successful year with both teams winning the Midland Regional Finals. Both  teams progressed on to the All Ireland Qualifers but were defeated in a close matches.

Cross Country and Running Awards were presented to Jack Donnelly and Darcie Murray .

The Beep test for fitness went to Darren Prendergast and Lauren Kelly.

The B.O.M. Scholarships for Irish and French were presented by Mr. Noel Merrick .

The Transition Year Spirit Awards were awarded to two students Gemma Dunne and Victoria Doyle for their outstanding commitment and hard work during Transition Year. 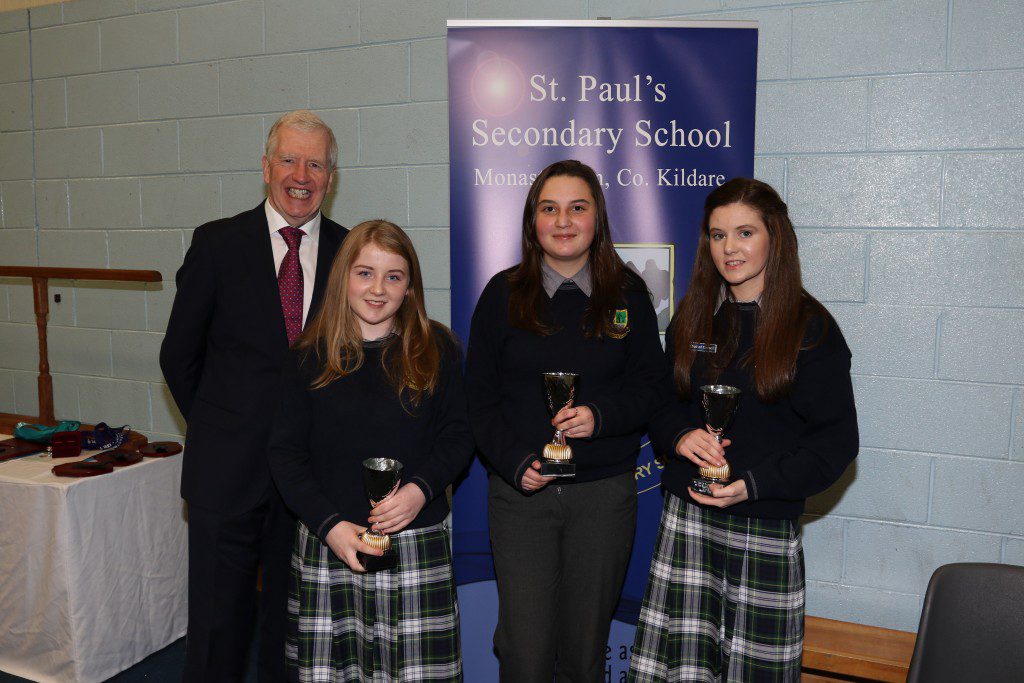 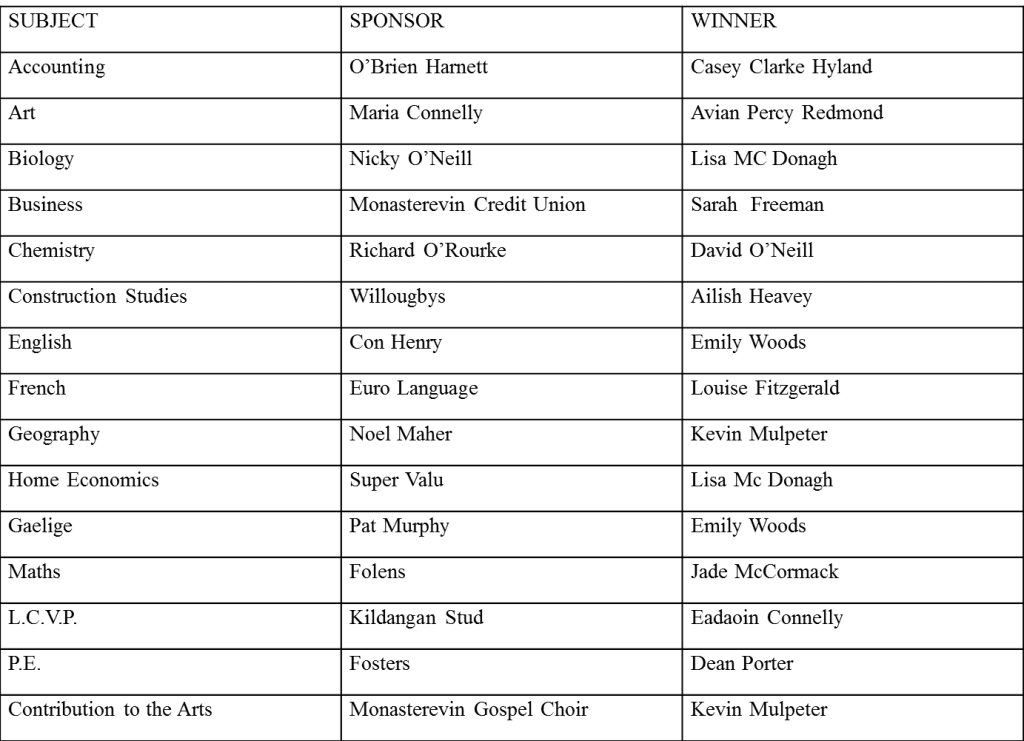 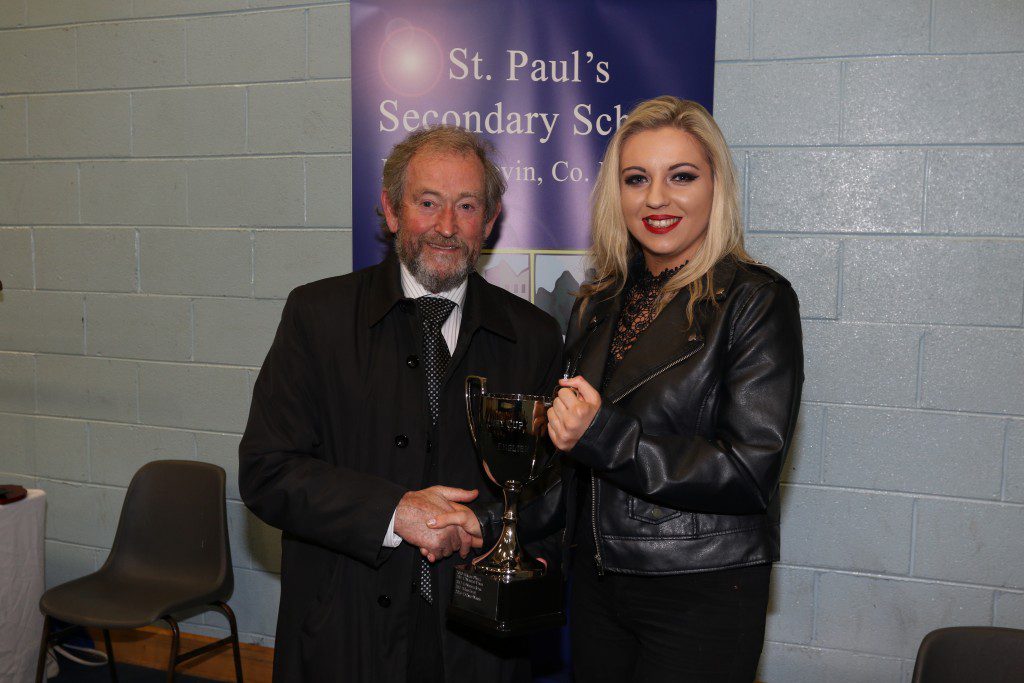 Kildangan Stud have kindly sponsored this bursary which will provide funding of  €1500 per annum and a laptop for a 4 year third level course . All 6th Year students were eligible to apply for this bursary. Joe Osborne, Managing Director of Kildangan Stud, presented the bursary to Eoin Cunningham.

Each year an outgoing Leaving Certificate student is acknowledged for the positive impact  they make on life at St Paul’s, and this year’s recipient was Dean Murphy

LC & JC STUDENT OF THE YEAR

The final awards of the night were the Board of Management Leaving Certificate and Junior Certificate Student of the Year Awards , which were presented by Bishop Denis and Teresa Miley from B.O.I. Monasterevin , to the students who achieved  the highest grades  in the State exams in 2015. The Junior Cert winner was Sarah Roche and the Leaving Cert winner was Lisa McDonagh. 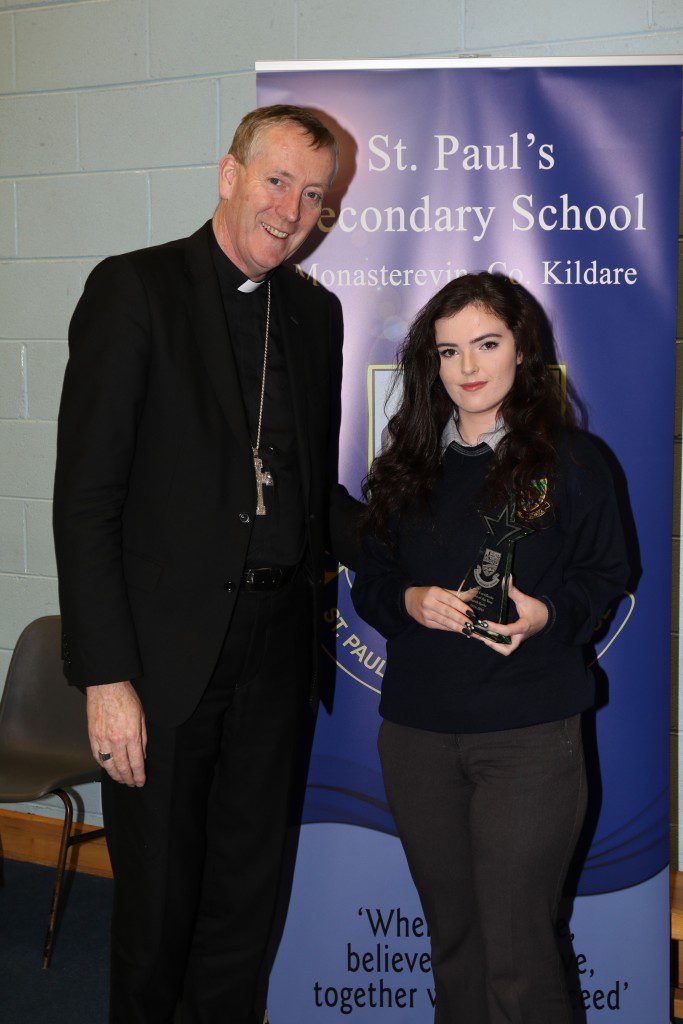